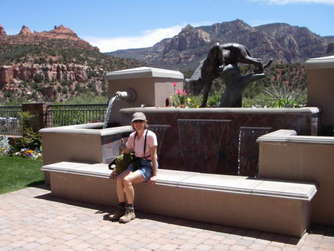 Another beautiful day dawned in Sedona, and we woke up as the sun peeked over the red rocks behind our hotel.  What a view!  After having Belgian waffles for breakfast at the hotel's continental buffet, we quickly headed out to start the day's adventures.  We were actually on the road before 8:30 am, a rarity for us.  We have been getting to bed about an hour before we do at home, so that helps with getting up early.

We had hoped to hike and see Cathedral Rock, Boynton Canyon, and Red Rock State Park today, which were just a smattering of the hundreds of hiking trails in and around Sedona (we are already talking about a longer trip here in the future).  Our first stop was Cathedral Rock, one of the stunning red rock formations just outside of Sedona city limits.  When we arrived at the parking area, we discovered that we needed a Red Rock Pass to park there, and the machine that dispensed them was out of order, so we had to turn around and head back into town to find out where to buy one.  A Red Rock Pass will allow you to park at all the various hiking trails, state parks, and recreation areas around the Sedona area, and is $5 for a single day.  We finally found a visitor's center and inquired, and it turned out that we could purchase the pass at the Circle K gas station up the road, so we did that and got back on our way to Cathedral Rock.

There were already a few hikers making their way up ahead of us on this short (1.2 mile round trip) but very steep trail to the "saddle" area between two huge red-rock formations.  Cathedral Rock is the most photographed red rock formation in the Sedona area, and has "starred" in many TV commercials over the years.  We had no idea how steep it would be, but it definitely challenged us.  We were holding onto rocks and scrambling up like mountain climbers, but it was kinda fun.  We saw several people turn around part-way up, but we persevered and made it to the top, and the views were well worth it.  After ascending approximately 600' from the parking area, we had many-mile views in all directions.  I had read that there was a vortex (an area where electromagnetic energy collects, creating energy "whirlpools") near the top of the saddle area on a conical area of black rocks, which Barry finally spotted.  We were able to take a small trail to the vortex area and climb up it.  Barry actually sat on the very top for some time, so hopefully he received all the power of the energy!  I didn't make it quite to the top, but close.  I don't know that I felt anything different, but it was certainly a beautiful and peaceful place to be.

On the way down the main Cathedral Rock trail, we ran into a twenty-something guy hiking up.  He asked if we would mind taking his picture, and of course we were happy to oblige.  He then noticed my Cleveland Indians ballcap and asked if we were from Cleveland.  We explained that Barry was originally from Ohio and is a big Indians fan, and he said he was from Cleveland, Shaker Heights!  He was in Sedona for a seminar.  We mentioned doing our rim to river and back Grand Canyon hike, which he knew the significance of (he seemed to know the trails there so had obviously been there before).  When he heard about our hike, he said "You guys rock."  Kinda cool to hear for a couple of old geezers!

On the way down the road out of the Cathedral Rock area, we had seen a couple of real estate for sale signs for building lots, so we decided to stop and pick up information sheets just for a little shock to the system, and shock they did.  We knew that the lots would have a million-dollar view of Cathedral Rock, but the first one was even richer:  $1.25 million!  It was a nice large lot of 3.57 acres, but still; can you imagine the house someone will build on it?  The second lot was slightly smaller, closer to the main road, but still had fabulous Cathedral Rock views, and was offered at a mere $699K.  Think we should put in an offer?  (Haha!)

Since we had gotten a later start than planned and had spent more time at the top as well, we were both starting to get a little hungry, so we decided to head back into town for a small lunch (a granola bar from our stash and a great fruit smoothie from the take-out "food court" area we'd found yesterday right down from our hotel).  Afterwards, we headed to Boynton Canyon, which was supposed to be gorgeous (and was), for a longer afternoon hike.  According to the Forest Service newspaper we had, the Boynton Canyon Trail was 2.4 miles, and we did the side spur Vista Trail (about 1/2 mile) to take in some additional views, so we planned on no more than three miles to the end of the trail (it was an out and back), and yet it went on and on.  It was absolutely gorgeous, encompassing several types of ecosystems; in fact, I realized it had all of NC in a short hike:  mountains/rock as in the NC mountains (though red instead of gray); sandy, flat areas with scrubby shrubs, like the NC coastal plain, and rolling mixed deciduous/pine forests like the NC piedmont.  Kinda interesting!

When we got to the lookout and turnaround point, after a brief, steep climb at the end of the trail, our GPS reported 3.77 miles, so we realized that the trail was indeed longer than the Forest Service listing said; in fact, we chatted with another couple at the end who said that their book indicated the Boynton Canyon Trail itself was 3.25 miles.  That matched up exactly with our GPS reading (including our estimate for the Vista Trail), but meant that we had 3.25 miles more to go to get back to the trailhead - not normally a problem for us, but Barry was out of water, and I needed a rest room (there were enough hikers on this trail that nature breaks were pretty much impossible).  So, we had to make pretty good time back, and did.  We ended up with a total of just under 7 miles for this hike, but our feet were definitely speaking to us by the second half of it, having still not completely recovered from the Grand Canyon hike.  I guess it's like the saddle area on a bike; whatever body part takes the brunt of your body weight suffers the most pain during and after a long event.

On the way back to the trailhead, we ran into a friendly couple from Tennessee, and it was kinda nice to hear a southern accent for the first time in awhile.  The woman mentioned having a daughter named Emily.  Then, we ran into a group of three people, and the woman said that I looked familiar.  Now that was quite a hoot since we were so far from home, so I assumed she must have been mistaken, but she finally placed me:  they had seen us on the shuttle bus at the Grand Canyon two days prior!  She remembered me because we had seen a couple of elk out the windows of the bus, and I had never seen one before so was excited about that.  I didn't remember seeing her, but it was kinda neat to run into someone we'd encountered before on this trip.