After our Bike Tour, Barry and I spent several days in the New York Finger Lakes.  His parents met us there as we returned from our tour, and it was great to see them.  We all stayed in the historic Taughannock Farms Inn.  Our room (see photos below), and the entire inn, was absolutely lovely, and had a view of Cayuga Lake. It was a bit more luxurious than our tour accommodations, to say the least! A nice reward for completing our tour....
We spent a morning hiking and birdwatching at Sapsucker Woods outside of Ithaca. Barry and I had been here on our Finger Lakes trip two years ago but wanted his parents to see it, as they are avid birders. We saw many birds, including quite a few of the namesake Sapsuckers!
We spent afternoons going to wineries, tasting and purchasing Finger Lakes wines. We came home with a few cases to replenish our wine racks!
The owner of one winery invited us to taste the grapes. He doesn't spray the first row so that he can share them with customers. They were absolutely delicious and so much more flavorful than store-bought!
We spent a morning at the Watkins Glen State Park and Gorge hiking. It was as breathtaking as we remembered it, and the folks were good sports about the strenuous hike up and back (three miles total with many stairs). They are in fantastic shape!
We drove into (and walked around) the charming town of Hammondsport, where Barry and his dad had stayed in this motel on their bike tour fifteen years prior. 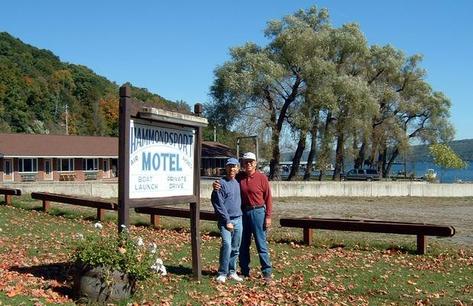 We came upon this stunning roadside waterfall driving around the area. We'd seen it two years previous (but in a hard rain, so our picture wasn't so good), and Barry and his dad had seen it fifteen years before too! 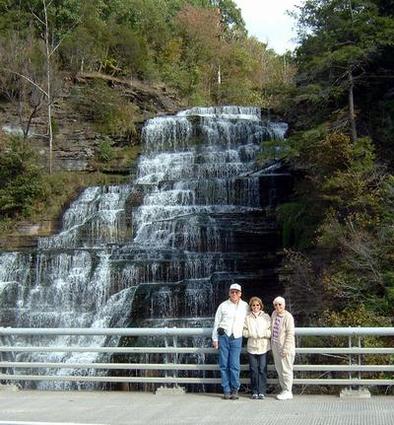 We spent the last two nights at the Glenora Inn and winery, where Barry and I had stayed two years ago. We didn't take as many photos as usual since we'd been here before, but it's a fantastic place with a superb restaurant. Here are a couple of photos we did take there. If you click on the inn link, you'll see how pretty it is and how lovely the lake-front setting.  The photo at the top of this page was also taken at sunrise there, over the lake.
This is my favorite picture from the time we spent with Barry's parents since we're all in it! I used the self-timer function on my camera to shoot this, and was so happy with how well it came out. This is on the deck at Glenora. 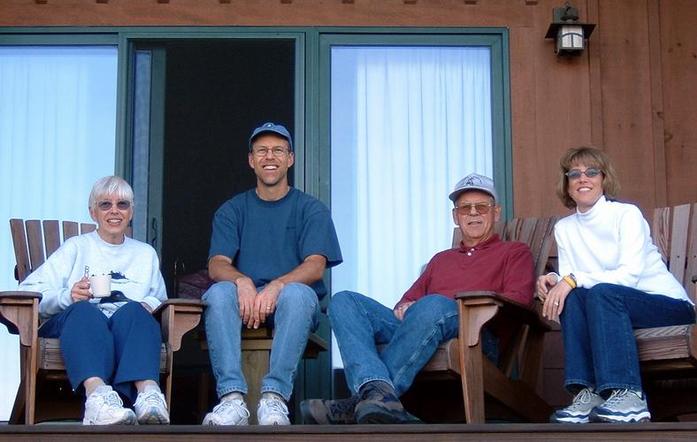