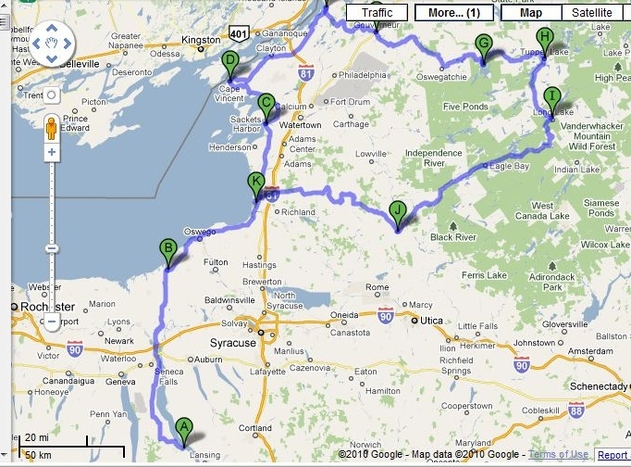 Our route - we started and ended at point "A"

We arrived at the delightful Taughannock Farms Inn this afternoon with our Bike Friday Pocket Crusoes folded into their soft cases. We had made previous arrangements with the inn to park our Honda Element there during our nine-day tour. We had a gorgeous room in the new Edgewood Guest House with a lovely view of Cayuga Lake.
That night, as we began putting our bikes back together, we discovered that my (Emily's) front rack was delivered with one incorrectly-sized screw (of four). I had decided at the last minute (after a two-day "shakedown" tour to Eden NC and back) to go with smaller front and rear Arkel panniers rather than only large rear panniers, so the front rack had arrived from Bike Friday just days before our tour was to begin, and as a result, I never mounted it on my bike, which was a stupid mistake. The oft-repeated advice to check out all equipment prior to a tour is absolutely correct! It took awhile, but Barry and I put our heads together and finally realized that we could cut one of the spacers down a bit and use the shorter screw after all. It took a diligent effort with Barry's dull pocketknife to cut the hard spacer down to size, but in the end, our modification was a success, and the bikes went together with ease.