Thursday May 4 - Sedona to Albuquerque

We had a little harder time getting out of bed today as I guess our busy days had finally caught up to us, but we still managed to get up around 7 am as we had a lot of driving ahead and wanted to check out by 9 am.  We didn't quite meet that goal as we got involved in some bird-watching from our balcony, and Barry was enjoying taking photos of the many birds attracted to the trees, flowers, and birdbath behind the hotel.  It was a lovely haven for them, with the red rocks in the background.  We saw a hummingbird numerous times and think it was a Black-Chinned, along with House Finches, Western Scrub Jays, and what we later identified as Lesser Goldfinches, among others.  Barry got lucky enough to spot a stunning male Western Tanager in a tree when he went out into the courtyard and grassy area to take a few more photos.  Unfortunately we've seen at least twice as many birds as we have been able to identify, even with the help of our new Western Birds book, on this trip.  The funniest sighting today was a male mallard who landed in the hotel pool for a brief dip; Barry caught a photo of him swimming about. 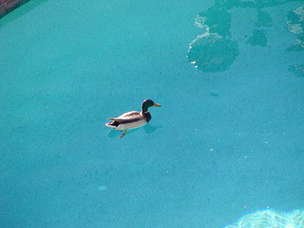 After checking out of the hotel and getting on the road around 9:30, we had a two-hour drive to the Petrified Forest National Park.  This park is in the Painted Desert, which was fascinating and beautiful in an other-worldly way.  The entire park looked like it must be on another planet.  To see most of it, we drove the lightly traveled 30-mile road through the park (we only went a little over 20 miles before turning back), stopping to take in several scenic overlook points for photos as well as three short trails, all of which were completely different.

The first was the Puerto Pueblo Trail, only a third of a mile, and wound its way through the remains of a hundred-room pueblo inhabited between the years 1250-1400 A.D.  Very interesting for the history buffs.

The second trail we walked, Crystal Forest, was a fascinating 3/4 mile loop through a "forest" of petrified logs with various colored crystals in them.  Really neat and otherworldly.  While in this area, we saw an interesting pair of birds we were later able to identify as Horned Larks from our photos, and a cool bright green largish lizard that we believe was a Collared Lizard. We enjoyed the wildlife as well as the interesting petrified wood.

The final trail we took was the Painted Desert Rim Trail, a 1-mile loop overlooking the Painted Desert.  In addition to amazing views of the desert, we saw numerous birds in this area and only wish we could identify them all.
We were a bit later in leaving the park than anticipated since it was so interesting, and then lost another hour springing forward as we crossed the New Mexico border (Arizona does not participate in Daylight Savings Time), so this day seemed to fly by.  New Mexico brought interesting landscapes with mountains and rocks in all directions off of the flat plain of I-40.  We also saw numerous trains traveling the rails paralleling the interstate, some of them nearly a mile long. The drive to Albuquerque from the park was around 2 hours, 45 minutes.

Arriving in Albuquerque brought us our latest snafu of the trip.  I had booked a reservation at the Clubhouse Inn and Suites in January on the recommendations I read on one of my favorite websites, tripadvisor.com.  When I went to check in, they had no record of my reservation!  I had my confirmation number and everything, and was able to show the front desk clerk the email I had received thanking me for my reservation with all the information, but she had no explanation for what had happened.  They were completely booked, but she honored my reservation saying that hopefully not everyone who made reservations would show up since they were now overbooked.  She never apologized for the mix-up, which I thought was kinda rude, so I grabbed the hotel manager's business card so that I could let him know what happened; obviously there is a glitch in their booking system that needs to be attended to.

We then went to "our" room with the key the clerk issued us, and someone was in the room!  Fortunately, they had the door partially open, so we didn't walk in on anyone, but still, that was the last straw.  I decided then and there I was not staying there.  I called the Holiday Inn reservation number from my cell phone in the parking lot and was able to book a room at the Holiday Inn Express in Albuquerque for the next two nights, thank goodness.  I then went back to the front desk and told Ms. Clueless that the room she'd given us was already occupied.  She just looked at me blankly and said "Someone was in the room?"  I told her yes and that I just wanted to have my credit card refunded and we would be staying elsewhere.  She never once apologized, just kept staring at the computer with a vacant look.  When we arrived home, I emailed the manager and received a sincere apology from him and a promise to look into the online booking system.

We then had a heck of a time getting to the Holiday Inn Express as there was construction on I-40, our GPS got confused, and we made a couple of mistakes too, and ended up going around our elbow to get to our armpit a couple of times, but finally found the HIX.  We were very tired and hungry by this time as we had only had snacks for lunch.  We were also quite thirsty as the desert air parches your throat and lips (but the dry air sure feels good in contrast to NC's humidity!)

We finally found the HIX and checked in.  We had a couple of restaurants on our list to try, but didn't want to drive any farther than we had to, since it was late (7:45 pm) and we were tired, so we ate in a Mexican restaurant recommended by the front desk that was right around the corner.  We didn't realize how close the restaurant actually was -- we could have walked if we'd known, and wished we had, since the traffic and contstruction made getting there a slow process. However, the restaurant was great and the waitress very friendly.  It was quite authentic, with an all-Mexican staff, including a roaming guitar player/singer.  The margaritas were large and thirst-quenching, and the dinner portions were astonishingly huge.  I had the chicken fajitas and Barry had a pork burrito with rice and beans.  I could have kicked myself for not taking the suite at the HIX that the reservation clerk offered as an option instead of the regular room.  For only $10 more per night, we could have had a fridge and a microwave and taken half of our bountiful dinner back for lunch the next day.