Today's the day!  We had planned, trained for, and dreamed about this hike for months, and we woke up bright and early at 5:30 am.  We'd planned to sleep until 6, but it was just as well, as with all the preparation and eating we had to do before leaving the room we still caught the shuttle fifteen minutes later than we'd planned (7 am instead of 6:45 am).  Actually, the slight delay ended up being serendipitous as on the walk over to the shuttle stop, we met a couple (around our ages) from Phoenix who had done the hike we'd planned (S. Kaibab Trail down to the Colorado River and back up the Bright Angel Trail) ten times!  He had an artificial hip (and a noticeable limp) and asthma, so I felt better about my chances of completing the hike.  They were able to answer some of our questions and let us know more about what the hike was like, so running into them was great.  We also met a young couple from Michigan on the bus who were planning the same hike today.  We would run into them many times along the way, though we never saw the first couple, Dave and Debbie, who were probably very fast, not stopping for pictures along the way, having done it so many times (once a year, they said).  They said they normally did it in around 8 hours, which is the fastest we've ever heard anyone doing it.  We were shooting for ten hours, ourselves.

After the shuttle ride, we got going on the long trek down the S. Kaibab trail at 7:15 am.  Despite the Weather Channel reporting a temperature of 34, it felt much warmer with the sun up, and we soon realized we'd worn more layers than we needed.  Before too long, we had to peel or zip off everything but shorts and a Coolmax top apiece and carry our extra layers in our daypacks.

Early on we were greeted with the spectacular sight of a California Condor flying very nearby.  Another "wow" moment!  We had hoped to see one of these magnificent birds, and actually got to see two on the way down this trail. We were also treated to incredible vistas at every turn. Although we took numerous pictures, they won't do justice to the beauty we saw this day.
The temperature continued to climb as we hiked downward.  The S. Kaibab Trail descends 4620' in just six miles, so is quite steep.  Our trekking poles helped, but I still felt my left knee starting to get sore, and my left shoulder ailing a bit from carrying a heavy pack with all the water and food, plus peeled-off clothing.  Wish I'd started in shorts and my t-shirt and just toughed it out.  I also felt the distant early warning signs of blisters on both pinky toes, which I hadn't had a problem with before.  I had recently added inserts in my boots to protect my feet moving forward in the boots, since I already have one black toenail (not caused by hiking but by some fast walking in new running shoes that were too tight in the toebox), so I suspect the slight change in the position of my feet and toes in the boots resulted in the blisters.
Along the trail at a point known as Skeleton Point, we finally saw it:  the Colorado River in all her aqua-blue, magestic glory.  Wow!  Yes, another one of those moments.  We would continue to see the river off and on for the rest of our trek down the canyon wall.  She was a real beaut, and as hot as it was getting, a dip into her icy-cold waters seemed like it would feel really good; of course, with the fast current, swimming is not allowed.  We could see white-water kayak and various pontoon boats loading up with people preparing to go on river runs, however.
Arriving at the river at last, we crossed the first suspension bridge, which was beautiful and provided amazing views of the river and canyon walls in all directions.  We crossed to the other side of the river and considered an additional mile of hiking to and from Phantom Ranch, but ended up deciding against it, and were glad we did as we'd had plenty of hiking by day's end, and an extra mile would have felt nearly impossible.

We found a nice spot to take a break on some rocks under trees.  I took off my boots and put blister bandages on my two pinky toes.  We ate some gorp and energy bars, and drank more water before taking off again to begin the trek upwards.  We would cross a second suspension bridge and hike on part of the River Trail before hitting the Bright Angel trail to ascend steeply to the top of the canyon. 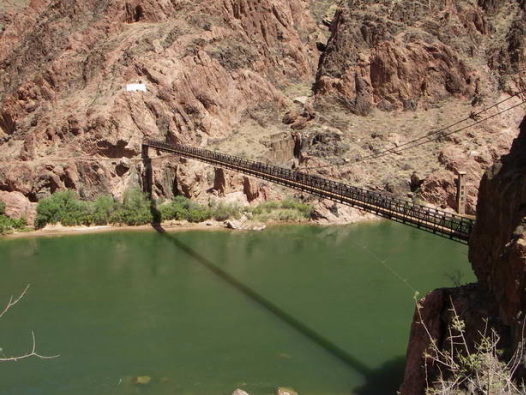 They say to allow twice as long to climb the canyon as to descend, but fortunately it did not take us quite that long.  We reached the bottom of the S. Kaibab trail at 3.5 hours and left the river area at 4 hours and five minutes.  If it had taken us the suggested time to reach the top, we would have been looking at seven additional hours and a total time of 11 hours or more.  Thankfully, we did better than that.

As we started ascending, the temperature continued to rise for awhile.  The highest we saw on Barry's temperature gauge was 96 degrees, but being a dry heat, it felt about ten degrees less to us; however, it was still hot, with full sun beating down on us and soaking into the rocky faces around us.  We saw on The Weather Channel that there is a heat wave going on this week in the southwest as it normally would not have been quite as hot this early in May.

A much needed snack stop 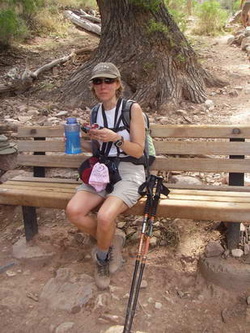 The climb up was long and hot until the last few miles.  Finally, the temperature dipped into the 70s and then into the 60s as we reached the rim, which was more like it.

At one point on the way up, I am fairly sure that I heard a rattlesnake rattle its tail very close to the trail, in some tall grass.  I hightailed it away from there quickly, and we shouted down to the Michigan couple, a bit behind us on the trail, to warn them to be careful.  I now wonder if the "rattle" may just have been a lizard rustling in some brush, but it sure sounded like a rattler, and I didn't want to stick around to make sure!

The hike upward went on and on, up many switchbacks, but we did pretty well.  Barry could have almost jogged up the way he was going, but I required a few more rest stops to let my heart rate go down a bit so that I could continue.  Still, even though I sometimes lagged, we passed quite a few other hikers on the way up and were only passed by one young guy hiking very fast by himself.  We are definitely stronger climbers than we are descenders, as we were passed by quite a few fit (and younger) hikers on the way down.
On the trail up there are 3 rest areas - one at 4.5 miles from the top, one at 3 miles and the last one at 1.5 miles. We had read that they would have water at these stops, however it turned out that only the one at 4.5 miles had water. Water is normally turned on May 1st, so maybe they were a little slow getting around to turning them all on. As a result we ran out of water with about one mile to go.
Finally, we could see a house at the top of the canyon and realized that we had ascended nearly the full 4620' feet back up to the top.  The trail became clogged with tourists in the last mile or two, all of whom looked very fresh compared to us, as most were doing a short day hike to the first rest stop (1.5 miles) and back up, while we were going on over 16 miles at that point.  When we finally reached the top, elated, we had completed the hike in 9 hours, 15 minutes, and were very pleased with that time.  Excluding the .6 mile walk to the shuttle stop, we had hiked 17.6 miles!