After another filling breakfast buffet at the HIX, we checked out and began our drive to the Grand Canyon.  The drive included many points of interest, most notably the Hoover Dam and Lake Mead.  Seeing the bright blue water and expansiveness of Lake Mead appear suddenly after rounding a curve was another one of the "wow" moments on this trip.  I'm finding that everything here in the west seems so big - the views, the rocks, the sky, and now this glorious lake. 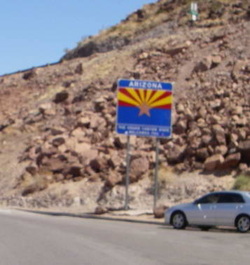 A blurry photo, unfortunately, of the Arizona state line

We stopped at a parking area near the Hoover dam and took a few photos before heading on.  As we got into Arizona, we finally started seeing more green along the road, and we encountered our first 75-mph speed limit on I-40.  Never see that in the east!  We also saw two fully-loaded touring cyclists riding on the shoulder.  In the west, cyclists are allowed to ride the interstates as there are so few routes available.

Along the road to the Grand Canyon...

We went through a little light rain as we approached Grand Canyon Village, and, after paying $3.25 per gallon for regular gas (yikes!) just before reaching the Entrance Rd., we finally arrived at the Grand Canyon.  My first view of the South Rim from the car brought a tear to my eye; this was indeed one of the world's seven wonders!  No photographs can do justice to the vastness, the colors, the spectacular geology of the Grand Canyon up close and personal.

We checked into our room at the Yavapai Lodge, which was quite comfortable and quiet, since it was removed from the hustle and bustle of the main village, and headed out on a walk on the Rim Trail to see the canyon and check out a few birds along the way.  We are adding to our birding life lists daily with all the different birds out west.

At some point along the trail while I marveled at the magnificence of the canyon and snapped photos, Barry realized that his glasses were not in his pocket.  He'd been using them off and on to check out birds or peer into our bird book, and the shallow pockets of his fleece jacket apparently allowed them to slip out at some point.  I'm beginning to wonder if losing things is to be a theme of this trip (let's hope not!)

We were starving as we had only had a Powerbar for lunch after our large breakfast, and had planned on an early dinner at the Arizona Room overlooking the South Rim, but now we had to head back, retracing our steps, and hope that we might find the glasses.  This added several additional miles to our walking total for the night, which we hoped to keep pretty low mileage since we had our long canyon hike the following day.  We ended up with 5.6 miles of walking, fortunately on mostly flat trail and roads, but more than we'd planned on, and didn't find the glasses.  Fortunately Barry has an eye appointment in June and needed a new prescription anyway, but it was still disappointing to lose them as it meant that he would need to do without reading glasses until we could find a place to buy an inexpensive pair (the ones he lost were expensive progressives).

By the time we got back to the Arizona Room, there was a 30 minute wait for dinner, and we were definitely ready to eat!  The food was very nice, with a Tex-Mex flair.  Barry had roasted red pepper soup and vegetarian enchiladas, and I had Arizona Caesar salad and pan-seared salmon with fruit salsa.  Delicious!  For dessert, we split a piece of peach/blackberry streusel pie.  Mmmmm....

After dinner and walking back to our room (still looking for the glasses, though it was getting quite dark), we did our many preparations for our next-day's hike: getting food ready, filling our hydration system bladders with water and putting them into the refrigerator to chill, and laying out our clothes and gear, then we hit the hay around 10 pm, knowing we had an early morning the next day.