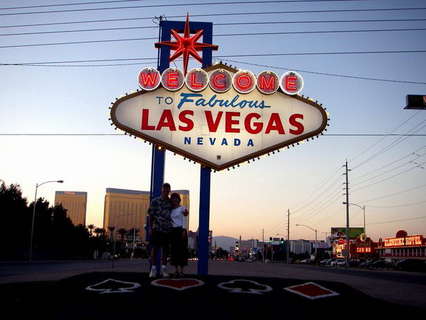 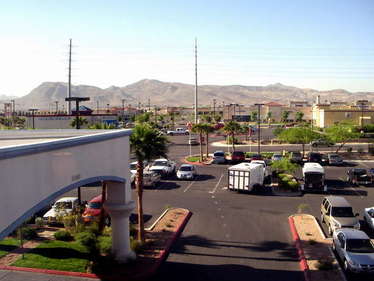 We had a neat experience this morning upon awakening.  Since we'd arrived in Vegas after dark, everything appeared absolutely flat (and the roads we took to get to the motel were indeed flat).  However, upon first peering out our window in the morning, Barry said "Wow."  And then, "The things we couldn't see last night."  That got me out of bed.  I ran over to see what he was talking about.  Opening the curtains, I also let out an inadvertent "Wow."  There were gorgeous red-rock mountains, completely development-free, right in view from our motel room!  We were later to see that the entire area is surrounded by these mountains, a few of which even had snow on the highest peaks, despite the hot, sunny climate in the valley.  They were so beautiful and exotic to us; we could hardly imagine having this view every day.
Today was a busy but fun day hanging out with Barry's friend Chris, who lives in Henderson (very close to our Holiday Inn Express) and works on software for slot machines for Bally.  After a filling brunch at the motel, we called Chris and arranged to go to his house soon thereafter.  After a quick drive over, we pulled into his subdivision and found it interesting that all the houses looked exactly the same; and these were large homes with three-car garages, not starter homes. But such is the housing around Vegas, as we discovered.  Subdivisions are all very matchy-matchy, with postage-stamp lots and houses in the beiges, tans, and reds of the desert.  In some ways, even though it's a bit bland and boring, it does make the many seas of roofs of all the houses in these very open subdivisions (no huge trees as in the east) blend in more and not assault the eye quite as badly.

It was great to see Chris, his wife Patricia, and their kids Erik, Paige, Haley, and Ashley again after so long; they had moved away from North Carolina three years prior.  They gave us a tour of their large house (and their tiny lot!), and we caught up for a short time before heading out with Chris as our tour guide for Red Rock Canyon.  Patricia and the kids stayed behind to shop and do other things.

Red Rock Canyon, about 30 minutes from Chris's house, was absolutely gorgeous.  It was unlike anything I've ever seen before; in fact, my mouth was open for most of the drive over, just taking in the interesting rock formations and earthy desert colors.  It was all so incredibly different from the green and forested east I'd been accustomed to my entire life.

At the canyon, we did a scenic drive and stopped at several scenic areas for short hikes, but we didn't go far.  Chris is undergoing cancer treatment, and although he seemed full of energy, we didn't want to wear him out.  We just appreciated him taking the time to tell us about the canyon and show us its beauty.

One thing that I had read about but noticed for the first time at the canyon was the astonishingly blue skies, even without the darkening power of sunglasses.  The sky against the red rocks was absolutely brilliant turquoise, yet another "Wow" moment on this trip.  I couldn't take my eyes off it.  Sure, we have pretty "Carolina blue" skies back home, but these desert skies have them beat hands down!

After returning from the canyon and changing clothes, we met Chris and Patricia for a "Vegas buffet" dinner at a huge hotel and casino within walking distance of our Holiday Inn Express.  It was quite good and definitely encouraged gluttony!  After eating, we visited the casino and Chris helped us sign up for a gambling card there.  As newcomers, our cards were preloaded with a "surprise" amount of money (up to $500, but we figured we'd get more like $5).  Chris and Patricia explained the fancy video slot machines to us, and we inserted our cards to see how much surprise loot we had.  Barry only had $3, but I had $25!  Patricia said she'd never seen anyone get that much, so my luck was starting out pretty good.  We had fun playing, and finally cashed out after many games. Barry ended up losing all of his $3, while I ended up with $17.65, though given that I started with $25, I actually lost money, but at least it wasn't my own!

Chris then drove us all to "The Strip" in Vegas for a tour of the place so often seen on TV, but never by us.  He made a great guide as his job with Bally requires visiting casinos, so he was familiar with most of the casinos downtown.  We saw many huge and fancy hotels like the Luxor, the Bellagio; New York, New York, and others, and all the casinos.  We didn't gamble any more other than a couple quick slot games for me; I invested a piddling $1 and ended up doubling my investment.  We took a monorail tram part of the way from hotel to hotel, but mostly walked, and walked, and walked.  We got to see a spectacular (and free) fountain light show at the Bellagio, did some people watching, and Barry and I each got a fancy (and very good) frozen drink at a bar to quench our thirst.  The dry desert air really does increase the need to hydrate.

We didn't quite make it all the way down the strip as it was getting late, and I in particular was getting sleepy after our crazy night and not quite enough sleep the night before (and perhaps a little jet lag; 10 pm probably felt a bit later to me still), so I was the party-pooper who asked to turn around before we got down to Caesar's Palace and a couple of other fancy hotels, but when we finally got back to the Holiday Inn at 11 pm, Barry seemed glad we hadn't gone farther as it would have been midnight then.  We certainly enjoyed our whirlwind tour of Vegas; however!   We'll be returning to Henderson for one night at the end of our trip (May 13), and plan on seeing Chris and Patricia again.